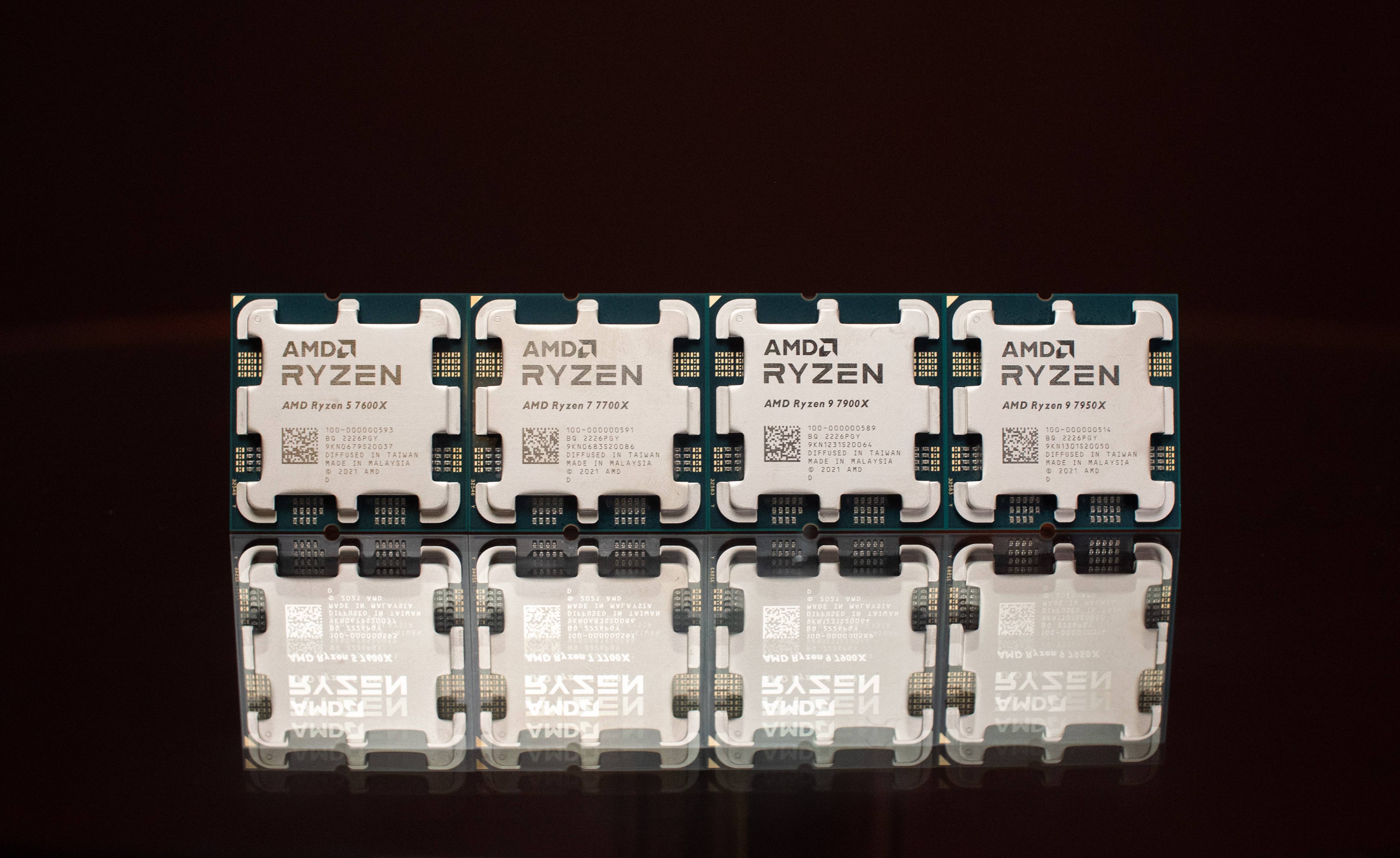 AMD unveiled its 5nm Ryzen 7000 lineup today, outlining the details of four new models that span from the 16-core $699 Ryzen 9 7950X flagship, which AMD claims is the fastest CPU in the world, to the six-core $299 Ryzen 5 7600X, the lowest bar of entry to the first family of Zen 4 processors.

Ryzen 7000 marks the first 5nm x86 chips for desktop PCs, but AMD’s newest chips don’t come with higher core counts than the previous-gen models. However, frequencies stretch up to 5.7 GHz – an impressive 800 MHz improvement over the prior generation – paired with an up to 13% improvement in IPC from the new Zen 4 microarchitecture. That results in a 29% improvement in single-threaded performance over the prior-gen chips. That higher performance also extends out to threaded workloads, with AMD claiming up to 45% more performance in more demanding applications.

AMD says these new chips power huge generational gains over the prior-gen Ryzen 5000 models, with 29% faster gaming and 44% more performance in productivity apps. Going head-to-head with Intel’s chips, AMD claims the high-end 7950X is 11% faster overall in gaming than Intel’s fastest chip, the 12900K, and that even the low-end Ryzen 5 7600X beats the 12900K by 5% in gaming. It’s noteworthy that those claims come with a few caveats, which we’ll cover further below.

The Ryzen 7000 processors come to market on September 27, and they’ll be joined by new DDR5 memory products that support new EXPO (EXtended Profiles for Overclocking) profiles. AMD’s partners will also offer a robust lineup of motherboards – the chips will snap into new Socket AM5 motherboards that AMD says it will support until 2025+. These motherboards support DDR5 memory and the PCIe 5.0 interface, bringing the Ryzen family up to the latest connectivity standards.

The X670 Extreme and standard X670 chipsets arrive first in September, while the more value-oriented B650 options will come to market in October. That includes the newly announced B650E chipset that brings full PCIe 5.0 connectivity to budget motherboards, while the B650 chipset slots in as a lower-tier option.

The Ryzen 7000 lineup also brings integrated RDNA 2 graphics to all of the processors in the stack, a first for the Ryzen family. These new iGPUs are designed to provide a basic display output, so they aren’t suitable for gaming. However, this feature does improve Ryzen’s positioning in several market segments.

As a reminder, the Ryzen 7000 processors come with the N5 TSMC 5nm process node for the core compute die (CCD) and use the TSMC 6nm process for the I/O Die (IOD). You can read many more details about the architecture in our Ryzen 7000 all we know article.

In the table above, we can see the 5nm Ryzen 7000 processors compared to the prior-gen 7nm Ryzen 5000 processors. We’ve listed the current retail pricing for AMD’s Ryzen 5000 chips and included the original launch pricing in parenthesis.

However, AMD raised the launch pricing of the eight-core 16-thread Ryzen 7 7700X by $100 over the 5700X, which is steep. AMD also kept the entry-level pricing at the same $299 with the Ryzen 5 7600X, but that isn’t a complete win – this same high bar for entry-level pricing wasn’t well-received with the Ryzen 5000 family. AMD says that the chips offer better performance per dollar than both Intel’s competing Alder Lake and the prior-gen Ryzen 5000 chips, justifying the price tag.

Other cost considerations weigh in, though. AMD’s Ryzen 7000 platform requires DDR5 memory that continues to command a premium over DDR4, and that will add to the overall system cost. In contrast, Intel’s looming 13th-Gen Raptor Lake processors have the option for either DDR4 or DDR5 memory, providing a more value-centric option. That said, Intel has also recently announced that it will increase its chip pricing due to supply chain disruptions and other factors, so we won’t know the full pricing story until Intel launches Raptor Lake.

Here we can see AMD’s progression in clock rates over the Ryzen era. As you can see, the 800 MHz increase in clock speeds with the 7000 series processors marks the largest single gain in Ryzen’s history. Now AMD has the highest official clock speed on the market, though Raptor Lake might beat it by a mere 100 MHz (more below).

AMD has also dialed TDP up to 170W for the Ryzen 9 models, a new high for the mainstream Ryzen family. As such, we see a 65W increase in the base TDP for the Ryzen 9 models and a 45W increase for Ryzen 5. Additionally, the peak power consumption (PPT) for the AM5 socket is now 230W. That’s a significant increase over the previous-gen Ryzen 5000’s 142W limit.

Naturally, we have to view the increased power consumption through the prism of how much performance-per-watt the processor provides, and here AMD says it has made big strides courtesy of the architecture and process node enhancements.

This is how Ryzen 7000 stacks up against Intel’s existing Alder Lake chips, along with information that we’ve collected about Intel’s yet-to-be-announced Raptor Lake. Be aware that the Raptor Lake specifications in the above table are not yet official.

Intel’s Alder Lake Core i9-12900K is faster in most workloads than the current Ryzen flagship, but its next-gen 13900K adds in eight more E-Cores, which will deliver substantially more performance in heavily-threaded workloads. Intel has also sprinkled in four more e-cores for its 13700K and 13600K.

Intel has also brought E-cores to its value-centric 13400 SKU for the first time, which will make for a significantly more competitive chip on the lower end of the market where AMD isn’t nearly as competitive. Again, pricing and performance are the wild cards, and Intel has yet to make any official announcements. However, it is clear that Intel will use a combination of higher clock speeds and more E-Cores to combat Ryzen 7000.

As with all vendor-provided benchmarks, you should take the above test results with a grain of salt. AMD hasn’t yet revealed the officially supported memory speeds for the Ryzen 7000 series, but the test notes do point to the company using DDR5-6000C30 EXPO memory profiles. {EDIT: AMD has now listed the supported memory frequency for Ryzen 7000 as DDR5-5200, so these benchmarked configurations were with heavily overclocked memory.}

These new EXPO profiles are very similar to the existing XMP profiles that we’re accustomed to, but they are designed specifically for AMD processors. The profiles allow one-click memory overclocking to predefined speeds. AMD’s test notes also say the company loaded these same memory profiles for Intel’s processors, but it is unclear if those profiles are tuned for, or will even work with, Intel chips. We’re following up for more information.

AMD’s comparisons to its previous-gen chips are impressive, but the benchmarks against Intel’s Core i9-12900K show substantial advantages in both threaded rendering applications (57% faster in vRay with 47% better power efficiency) and in single-threaded work, though we do have to caution that the Geekbench 5 results are only indicative of one single-threaded workload. Also, that appears to be a non-zero axis that visually amplifies the disparity between the chips. According to AMD’s results, Ryzen 7000 is from 7% to 12% over Alder Lake in this benchmark, but we’ll need to see more varied head-to-head benchmarks to make a strong determination here.

Perhaps most surprisingly, AMD claims that its lowest-end chip, the Ryzen 5 7600X, is 5% faster in gaming than Intel’s flagship 12900K. In fact, AMD says the combination of the Zen 4 architecture and the TSMC 5nm node offers the best performance improvements in lower TDP ranges. That makes sense given the typical power/performance tradeoffs as you dial higher up the frequency/voltage curve.

Of course, the question is how all of this will compare to the coming Raptor Lake processors, and if the EXPO memory profiles had an impact on the Intel test systems. The overclocked memory definitely has an impact on the AMD systems — these tests use overclocked memory that could carry eye-watering pricing for kits that can match this level of performance. We’ve also included the test notes at the end of the article for your perusal.

AMD shared some of the initial details of the Zen 4 architecture, saying it is an iterative advance over Zen 3. In contrast, Zen 5, which arrives in 2024, will be a ground-up redesign.

Zen 4 has plenty of advancements, though. AMD last projected an 8 to 10% IPC gain over its Zen 3 but has now revised that figure to 13%. AMD measured this as a geometric mean of a wide variety of workloads, including gaming. As you can see above, the gaming benchmarks tend to show the largest IPC gains, while some of the workloads that are more traditionally used to measure IPC show more muted gains.

AMD accomplished the improved performance through several advances, but widening the front end to better feed the execution units and improving branch prediction account for 60% of the IPC gain. AMD also increased the op-cache by 1.5x, improved the load/store units, and doubled the L2 cache capacity. AMD worked with TSMC to tune the 5nm process for its design goals, resulting in a specialized 15-layer N5 process node.

AMD has enabled support for AVX-512 instructions, giving it a curious advantage over Intel, which pioneered the SIMD instructions but ended up disabling them with Alder Lake. AMD described its AVX-512 implementation as a ‘double-pumped’ execution of 256-bit wide instructions to defray the frequency penalties typically associated with Intel’s processors when they execute AVX-512 workloads. This could result in lower throughput per clock than Intel’s method, but the higher clocks will obviously offset at least some of the penalty. We’ll have to wait to learn more about the new implementation.

AMD also claims to deliver better power efficiency in a much smaller package than Intel’s Alder Lake processors. The company compared its Zen 4 core to Intel’s Golden Cove to highlight that it is half the size at 3.84mm2, yet wrings out 47% more power efficiency.

AMD announced that its X670 and X670E chipsets will be available at launch, while the newly-announced B650E and the B650 will arrive in October. The B650E motherboards will provide PCIe 5.0 to both the M.2 and GPU slots, while the standard B650 will only have 5.0 to the M.2 slot, and PCIe 4.0 everywhere else. AMD says that both types of B-series boards will offer the same performance and overclockability – the only difference resides in the PCIe connectivity.

AMD says that motherboard pricing will drop as low as $125, but hasn’t clarified if that constitutes pricing for X- or B-series boards. We have far more coverage of these platforms in our Ryzen 7000 explainer.

AMD hasn’t announced the official base memory speed for Ryzen 7000, but the above slide with DDR5-5200 listed in 2022  shows that AMD might launch products with increased base DDR5 frequencies in 2023. AMD also expects memory makers to be ready with EXPO-enabled kits at launch. EXPO enables one-click overclocking, and AMD says it enables latencies as low as 63ns. EXPO kits will reach up to DDR5-6400 at launch.

Of course, the devil with DDR5 is in the pricing details. While we no longer see DDR5 shortages as we did immediately following the Alder Lake launch, DDR5 continues to command a premium. Above, you can see some price comparisons that we generated today for both standard (default) and the best reasonable overclocked (Max FCLK) kits.

We asked AMD about the memory pricing situation, and the company tells us that it expects supply and pricing to improve through the end of the year, and says that the memory vendors are working to reduce pricing. AMD said we could even potentially see pricing crossover for DDR4 and DDR5 occur in the middle of 2023. It is noteworthy that the latest market projections do point to a looming memory supply glut due to the recent unexpected decline in PC demand, which should naturally help pricing as well.

And the rest is down to testing the silicon to see if AMD’s claims pan out. The Ryzen 7000 chips will be available on September 27, and AMD has worked to assure plenty of supply. If tradition holds, you’ll see reviews in a similar time frame.