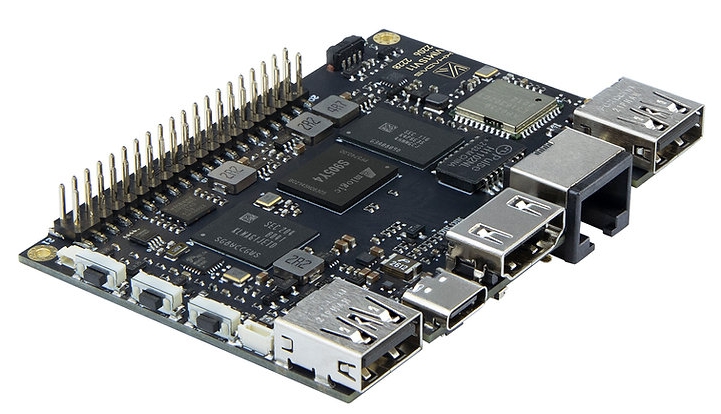 The Khadas VIM1S is a credit card-sized single-board computer with a Amlogic S905Y4 processor featuring four ARM Cortex-A35 CPU cores clocked at 2 GHz and Mali-G31 MP2 graphics that can handle a single 4K display or up to four 1080p displays.

Available now for $65, the VIM1S is an update over the company’s previous-gen VIM1, which is still available for $55 and up.

While the new model has a CPU that’s probably more of a lateral move than an upgrade, the VIM1S does have a few obvious improvements including a newer GPU, support for LPDDR4 memory (up from DDR3), and WiFi 5 and Bluetooth 5 (up from WiFi 4 and Bluetooth 4.2).

The little computer features 2GB of RAM, 16GB of eMMC 5.0 storage, and a set of ports that includes:

There’s also a 40-pin Raspberry Pi-compatible header, 3 user programmable buttons, and support for Android, Ubuntu, and other operating systems (although Khadas says that at this point the VIM1S is best suited for developers and early adopters).

Liliputing’s primary sources of revenue are advertising and affiliate links (if you click the “Shop” button at the top of the page and buy something on Amazon, for example, we’ll get a small commission).

But there are several ways you can support the site directly even if you’re using an ad blocker* and hate online shopping.

Contribute to our Patreon campaign

* If you are using an ad blocker like uBlock Origin and seeing a pop-up message at the bottom of the screen, we have a guide that may help you disable it.